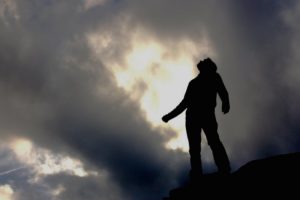 I don’t think you’d be excited to pick a fight you already knew you would lose. That would be especially true if someone else told you to pick that fight. Such is the case of Mayor Pete Buttigieg encouraging Vice President Pence to take up a quarrel with God concerning Buttigieg’s homosexual lifestyle.

In an article entitled, “Buttigieg challenges Pence on LGBTQ rights: Your quarrel is with my creator,” Mayor Buttigieg states, “I can tell you, that if me being gay was a choice, it was a choice that was made far, far above my paygrade.” Mayor Buttigieg continued by saying, “And that’s the thing I wish the Mike Pence’s of the world could understand, that if you have a problem with who I am, your problem is not with me. Your quarrel, sir, is with my creator.”

If you are not aware of who Buttigieg is, you soon will be. In short order, he will announce his candidacy for the office of President of the United States, and he has dreams of his partner and him becoming the “very first same-sex couple in the White House.”

So, does Vice President Mike Pence have a quarrel with God? After all, according to Buttigieg, he doesn’t have a choice and if he’d had a pill to make him straight, Buttigieg said, “I would have swallowed it before I could get a sip of water.”

At the start, I think we need to understand that Buttigieg is really just attacking a “straw man.” Unless I missed it, I do not believe Pence has stated any such “problem” with Pete Buttigieg. I am aware that Pence, in accordance with traditional/historical Christianity, does not agree/approve of same-sex marriage, and perhaps that is the “problem” Buttigieg is referencing, but Pence’s rejection of same-sex marriage does not imply anger/hatred or a “problem” toward any individual, including Buttigieg.  Thus . . . the straw man.

Although Lady Gaga made it a very popular song and it’s a popular concept that homosexuals and transgenders are simply born that way, according to a study by John Hopkins, “there is virtually no evidence that anyone, gay or straight, is ‘born that way’ if it means that their sexual orientation was genetically determined.” The report goes on to say, “The strongest statement that science offers to explain sexual orientation is that some biological factors appear, to an unknown extent, to predispose some individuals to a non-heterosexual orientation.” In summary . . . No one is just “born that way.” Now, if anyone suggests that I, a conservative Christian, am reading too much into this report, then you would also have to explain why The Human Rights Campaign (America’s largest national lesbian, gay, bisexual, transgender and queer civil rights organization) threatened to penalize Johns Hopkins University if it didn’t denounce the report. In essence, The Human Rights Campaign also realized the report did not support the “born this way” narrative.

But my attention is not on the scientific answer of what Buttigieg proposed; rather, it is the theological/moral implications. What’s interesting is that we don’t have to speculate about how the hypothetical “quarrel” would play out. God has already told us.

Let me begin by pointing out what was most notably absent from the report on Buttigieg’s speech. It is not reported that he denied the sinfulness of homosexuality in his speech. Not once did he refute the explicit command in scripture, “You shall not lie with a male as with a woman; it is an abomination.” (Leviticus 18:22). That moral law is repeated in Romans 1 where homosexual acts (for both men and women) are described as “dishonorable passions” and “contrary to nature.” Buttigieg also never denounced these passages as being misinterpreted. Instead, what Buttigieg attempted to do was give himself a free pass. After all, according to Buttigieg, not only was he born that way, God, his Creator, made him that way and, if God made him that way, then he is justified in his homosexual behavior. To continue Buttigieg’s line of thought does lead to some interesting and dangerous conclusions.

• If God’s law declares what is righteous and what is sinful, but God creates a person with an inclination towards a particular sin, according to Buttigieg, then it ceases to be sinful for that person, and that sinner is justified in his/her sin due to being “born/created that way.”

• Secondly, if the innate desire/inclination for a sin justifies the sinner (as stated above), then God’s prohibition of any sin is directed only to people who don’t have the innate inclination/desire for the sin; and yet, participate in the sin. In other words, homosexuality is only sinful for people who are not homosexuals.

So, according to Buttigieg, he is at peace with God and justified in his behavior due to God making him that way, but since Pence does not affirm Buttigieg’s lifestyle/conclusion, the “Mike Pence’s” of the world have a quarrel with God?

Brevity has never been my strong suit, but the short answer as to why neither Mike Pence, Pete Buttigieg, Paul Lyle, nor anyone else has a quarrel with God regarding how we are made, our personalities, inclinations, and even our struggles/failures with various sins is that . . . well . . . he’s God, and we’re not. “But who are you, O man, to answer back to God? Will what is molded say to its molder, ‘Why have you made me like this?’” (Romans 9:20) You see, none of us can look at our sin, then look at God, and conclude that the blame resides with the Lord. Without a doubt, God created Buttigieg, and without a doubt Buttigieg’s homosexual desires/lifestyle are sinful, but to conclude, “God made me this way; therefore, my sin IS NOT sinful” is nothing but a feeble attempt of self-justification.

If Buttigieg’s self-justification is sufficient to excuse his sinful behavior, when and where do we stop justifying all sin? Can we not all say, “Well, God made me that way,” and then dismiss the guilt/price of our sin?

• Could Noah blame God for his drunkenness?
• What about Abraham and Sarah? After all, didn’t God make both him and Sarah impatient; therefore, Hagar wasn’t their fault?
• Could David blame God for his sinful behavior with Bathsheba simply because he was a powerful king with strong attractions to beautiful women?
• I wonder why Paul didn’t blame God for all those he imprisoned and killed. Didn’t God create him in such a way that he was zealous for the law?

Contrary to Buttigieg’s line of reasoning, we absolutely cannot justify our sin. According to Scripture, we are not only responsible for our sins; there is a price/wage required for them. The only hope we have of being justified is not in us nor of us. Salvation and forgiveness is only possible through our Lord and Savior, Jesus Christ, who paid the price for our sins on the cross.

As I conclude this blog, there was one more phrase that I caught my attention. Buttigieg (a devout Episcopalian) said, “My marriage to Chasten has made me a better man and yes, Mr. Vice President, it has moved me closer to God.” In a word . . . IMPOSSIBLE! This is tantamount to a child saying that he/she is getting closer to clean as they wallow in mud. Our sinfulness NEVER puts us closer to God.  God can certainly forgive Buttigieg for his sins as He forgives all who repent and put their faith in Christ.

We must remember that the same Creator who created Buttigieg, created marriage as an institution for the union between a man and a woman.  The institution doesn’t change simply because we might want it to morph into something else that fits us, our opinion, or our lifestyle. The real problem is not between Pence and Buttigieg nor is it between only Pence and Buttigieg’s Creator. The real problem is between all of mankind and God due to our rebellion.  You see, God is the judge and we are all guilty. Apart from faith and trust in Christ, we are condemned already (John 3:18).

Quarreling with God over his law and blaming God for our transgressions is . . . well . . . pointless.  I think Adam and Eve tried that.  Have you noticed that we are no longer in the Garden?