Is The Bible Pointless? 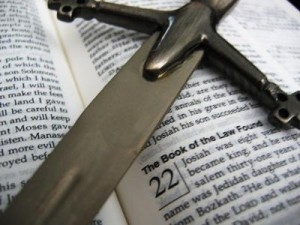 I remember growing up and learning about the Armor of God.  You know that passage in Ephesians where we are told to “take up the whole Armor of God.”  This battle uniform is described as having the belt of truth, the breastplate of righteousness, shoes of readiness given by the gospel, and of course the shield of faith.  All of these things are given in order that we might be protected, not from earthy foes, but from attacks beyond the physical realm.  Oh yes, there is one more item . . . not meant for defense, but rather offense . . . that being the sword, The Word of God.  As a child, I always thought it was weird to talk about the Bible, a book, as a sword.  The Bible was small and short, blunt, and made up of a bunch of paper, whereas a sword was long, sharp, and made of steel.  Of course, now that I am older, I understand the symbolism.  However, I am not sure others who claim the faith of Christianity fully grasp the power scripture has as their only weapon against “this present darkness.”  This has so stirred me that I am back at my blog after a long hiatus.  Let me share with you two examples.

A new miniseries, The Bible, has recently debuted on the History Channel.  I was interested to see, and truly hoping, that it would be true to scripture.  I was also curious if it would be appropriate for my children to watch.  Oh, I was pretty sure there would not be too much violence or even foul language. But would it give my children an accurate picture of God?  Well, it didn’t take long for me to learn that the The Bible used the Bible as reference material, but most certainly did not use it as THE source.  Now let me be clear.  When someone decides to tell the Bible in a short amount of time they MUST choose what to include and what to exclude and no two people would agree entirely on the other’s choices.  So I am not here to criticize why one particular event was omitted and another included.  Secondly, I am not here to talk about the acting or the special effects.  What I am critical of is this: the blatant and intentional ignoring of scripture or just the plain ignorance of scripture when presenting THE BIBLE.

The reason it didn’t take long for me to know I was going to be disappointed was the opening scene.  Noah is in the ark being tossed about during the flood and he begins to tell the story of creation.  Now, I don’t think I was the only person surprised that the beginning of The Bible did not start at . . . well . . . the beginning.  OK, Noah is going to tell the story of creation and at the same time visually the series shows what creation might have looked like . . . I can go with that.  The problem is that Noah is telling the story to little children.  My friend, there were no children on the ark.  Noah, his wife, Noah’s three sons, and their wives were the only people listed on the ark.  Over and over (Genesis 6:18, 7:7, 7:12), we are told that eight people, along with all the animals, entered the ark.  Then in Genesis 8:16, God tells these same eight people to leave the ark because the waters have subsided.  So the question is simply this, “Why put Noah on the ark telling children the story of creation?”  Why not just stick with scripture?  Why change something so clearly presented?  Sure, Bible scholars have different interpretations of different passages and there is no doubt that the Bible is not an easy read, but when something so simple is ignored, what excuse can be given?

Why bring this up now?  Much has already been written about the inaccuracies of the miniseries.  Well, quite frankly, it’s the gift that keeps on giving.  I continue to have those, “You gotta be kidding me” moments.  Now that the series is focused on the life of Christ, one aspect I found quite interesting was the interaction of Mary as she traveled with Jesus.  At times she was leading and spurring on the apostles.  She was involved in the feeding of the 5000 and she even interacted with Jesus when he asked the apostles, “Who do you say that I am?”  The historical accounts found in the Matthew and Mark never even mention Mary until the crucifixion.  In Luke 8, we are told that some women, including Mary Magdalene, were with him in his travels, but she is never mentioned again until the resurrection.  In John, Mary Magdalene is once again never mentioned until the crucifixion.  There is no doubt that Mary stood by Jesus side during his crucifixion when all Jesus’ apostles fled (except for John) and she was one of the first to see Jesus after his resurrection.  I won’t take that away from her.  Unfortunately, I can’t give her the prominent role Mary plays in the miniseries when the Bible is virtually silent concerning her.  How non-PC of me.

Another noteworthy scene is how the raising of Lazarus was portrayed.  This miracle is only recorded in the book of John.  When Jesus raised Lazarus, scripture could not have been clearer:  “He cried out with a loud voice, “Lazarus, come out” (John 11:43).  The Bible miniseries depicted Jesus going into the tomb and quietly speaking to Lazarus as he kisses his head.  With that meek, while sweet, gesture, Lazarus comes back to life.  Jesus and Lazarus then walk out of the tomb together.  Unbelievable!!!  It is as if the writers and producers decided, “The raising of Lazarus is a cool story . . . now how do we want to tell it.”

Perhaps you think I am being too critical.  Understand this.  We do not have the authority to teach, preach, and in this case, show the Bible however we would like.  It is God’s Word and it was written exactly as it is for a reason. Let me tell you where taking these liberties lead.  Last week I was watching an episode of The O’Reilly Factor.  He was talking about the The Bible miniseries and the incredibly ridiculous controversy over “Was the character of Satan made to look like Barrack Obama.”  This made-up controversy prompted O’Reilly to do a segment entitled – “Does Satan Exist?” This is where it gets interesting.  Bill O’Reilly (an Irish Catholic) had two guests on the show to discuss this issue.  One guest was a Jewish Rabbi Aryeh Spero and the second, Dr. Christopher Ruddy, professor of theology at The Catholic University of America.  I know . . . sounds like the beginning of a bad joke, but let’s move on.  Upon answering O’Reilly’s question “Does Satan exist,” Dr. Ruddy stated that he believed that Satan is a fallen angel and a spirit of evil.  Rabbi Spero disagreed and stated that Satan is actually just a force within us, an instinct, upon which we either choose what is good, or we simply choose what is wrong or evil.  The devil or Satan is simply the instinct to do evil and just represents evil in the world.  Bill O’Reilly then stated that it was “interesting” how these two men saw things so differently.

O’Reilly then asked another question: “What happens to people who choose evil after they die?” Rabbi Spero stated that there is a judgment and people who do evil and harm people disproportionately to doing good end up in hell.  Dr. Ruddy then stated that “There is accountability and we will be judged on what we’ve done or not done.”  The discussion goes on and certainly not EVERYTHING they say is in error, but here is the kicker.  Over and over, O’Reilly talks to these two guests about what they “believe” and what they “think.”  The only time the Bible is even mentioned, Rabbi Spero is quick to dismiss an Old Testament passage.  So, let’s get this straight.  There were two Roman Catholics discussing spiritual things, one with a PhD, and not one time was scripture even referenced.  Dr. Ruddy was asked about judgment, heaven, and hell, and not one mention of Jesus Christ.  Is this attitude not the exact same attitude seen in those who created the miniseries?  Yes, The Bible is a good book to use as a starting point, but ultimately, “How do we want to tell the story?  What are our thoughts and our opinions?”  So, is the Bible pointless?

As I conclude this post, let me give you the truth on two issues.

Is the devil or Satan a spirit (fallen angel – personal being) or a force.  Rather than share my beliefs or opinions, how about I consult the Bible?

The Old Testament was for the Rabbi, since Jews do not recognize the New Testament as Holy Scripture.  What about a few New Testament passage in regard to Satan.

The temptation of Christ by Satan is recorded in the other synoptic gospels (Mark and Luke) as well.  No need to repeat here.

What about the Apostle Paul . . . the writer of the majority of the New Testament?  Did he think Satan was a real being?

And of course, the end of Satan:

Satan is a very real being – a fallen angel.  The Bible describes him as someone who talks, is talked to, responds, falls, enters, demands, is crushed, can outwit, disguises, tempts, hinders, etc.  Let me call your attention to the Zechariah passage where both Joshua the high priest and Satan are STANDING before the angel of the Lord.  If in fact Satan is not real, but rather just “represents evil,” then how do you deal with Joshua?  He could not be considered real either.  By the way, Dr. Ruddy did get this one right, but why not point O’Reilly and the Rabbi to the truth of scripture?

16“For God so loved the world, that he gave his only Son, that whoever believes in him should not perish but have eternal life. 17For God did not send his Son into the world to condemn the world, but in order that the world might be saved through him. 18Whoever believes in him is not condemned, but whoever does not believe is condemned already, because he has not believed in the name of the only Son of God. 19And this is the judgment: the light has come into the world, and people loved the darkness rather than the light because their works were evil. 20For everyone who does wicked things hates the light and does not come to the light, lest his works should be exposed. 21But whoever does what is true comes to the light, so that it may be clearly seen that his works have been carried out in God.”

There is not one single solitary word about “disproportionate” evil verses good.  My friend, apart from Christ you are condemned ALREADY.  The scales were already weighed and we were found wanting (Daniel 5:27).  All authority in heaven and earth has been given to Christ and Him alone (Matthew 28:18).  Try as we may, we cannot rewrite or revise what has already been written. God has breathed into his Word, The Bible.  It is quick, and powerful, and sharper than any two edged sword, piercing even to the dividing asunder of soul and spirit (Hebrews 4:12).  The problem is that this sword is only effective if it is USED.  Please, quit making the Bible dull and pointless.