Just another step . . . Time to kill your newborn? 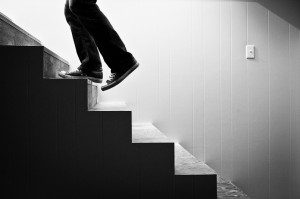 (Photo by Keith Galick)
Many times when people are encouraged to achieve a goal, they are advised to take it one step at a time. We are all familiar with that process. It doesn’t matter if your goal is to lose weight, pursue an education, or learn a foreign language. It’s always done one step at a time. It is virtually impossible to achieve a goal all at once or overnight. However, while incremental steps are good, beware. There is also a dark side to this process.

All of us have heard the anecdote about boiling a frog. For the sake of those who haven’t:

If you put a frog in boiling water, it will simply jump right out. But if you put the frog in cold water and slowly turn up the heat, the frog will not recognize the danger and unknowingly be cooked to death.

I think the questions that beg asking are, “When will people awaken to the fact that they are being cooked to death AND when will they learn that they are not the only victims?” Let me get to the point. The heat that is being turned up is moral decay in our world. The victims??? The victims are those too blind and deaf to realize it and little ones too helpless to speak out for themselves. Who is turning up the heat? All those who adhere to a worldview that is in contrast, conflict, and contrary to a Biblical worldview, that’s who. What is the moral decay of which I am referring? In a word, infanticide.

March 2, 2012 – An article was published by the British Medical Journal entitled “After-birth abortion: Why should the baby live?” At last, another huge step has been taken for those who have devalued human life . . . it has been quite a journey since Roe v. Wade. Doctors Alberto Giubilini and Grancesca Minerva have come to a startling conclusion concerning an ethical decision in the arena of abortion. They have concluded that a newborn baby is only a “potential person” and has no more right to life than an unborn child AND THEREFORE it is ethical, in their eyes, to kill a newborn.

What were the first steps? Perhaps one might call them baby steps. You see, for years it was put before the general public, “It isn’t a human. It isn’t a baby. It’s just a clump of cells.” But for those with a Biblical worldview, that was never in question. Believers that adhere to a biblical standard understand the reality that life begins at conception and God is the one who “knits us together in our mother’s womb” (Ps. 139:13). We understand that each person is, “fearfully and wonderfully made.”

The movement continued with the next step. You see, no longer was the issue a clump of cells or a baby (by the way, ultrasound crushed that argument). Now the issue was women’s rights. As our president so clearly stated concerning his daughters, “No one should be punished with a baby because of a poor choice.” A woman should have the right to choose. No need to argue over justifications. They are no longer important because what you are dealing with here is a punishment. Why not have a late term abortion? As a matter of fact, why not have a partial-birth abortion? It has nothing to do with the baby’s life, right? Dr. Haskell was asked about partial-birth abortions and stated that 80% are purely elective. For those who want to protest, “This type of abortion can only be done when the health of the mother is in question,” please wake up. Dr. McMahon submitted to congress that the most common reason for partial-birth abortions is . . . depression.

And now . . . as of today . . . the next step. There is no need to make a decision during the nine months of pregnancy. Now, according to the article written for medical ethics, one can have the baby, and then decide to have it killed. If your heart has not dropped into the pit of your stomach yet . . . let me put before you the conclusion written by Dr. Giubilini and Dr. Minerva.

If criteria such as the costs (social, psychological, economic) for the potential parents are good enough reasons for having an abortion even when the fetus is healthy, if the moral status of the newborn is the same as that of the infant and if neither has any moral value by virtue of being a potential person, then the same reasons which justify abortion should also justify the killing of the potential person when it is at the stage of a newborn.

How could these doctors come to such a conclusion? Surprisingly, they are actually stating what we Christians have been proclaiming for years. Did you get that??? THEY AGREE WITH US. They just have the argument turned upside down.

Pro-life advocates have argued that the unborn child is not a clump of cells, but rather it is a baby, therefore abortion is murder and ethically wrong. Simply stated, there is no difference between killing an unborn child and a newborn child. Doctors Giubilini and Minerva agree, albeit with a twist, BECAUSE if we kill unborn babies then there is no reason not to kill newborn babies. By the way, notice that the name has changed as well. It is no longer called infanticide. It’s now termed an “After-birth Abortion.”

The abstract of the article best states what happens when one does not adhere to a biblical worldview.

Abortion is largely accepted even for reasons that do not have anything to do with the fetus’ health. By showing that (1) both fetuses and newborns do not have the same moral status as actual persons, (2) the fact that both are potential persons is morally irrelevant and (3) adoption is not always in the best interest of actual people, the authors argue that what we call ‘after-birth abortion’ (killing a newborn) should be permissible in all the cases where abortion is, including cases where the newborn is not disabled. (emphasis mine)

Well, you say, surely they have arrived at their destination. Surely there are no more steps. You would be wrong. There is another step yet to be taken and at that point, the heat is all the way up and the frog is dead. The final and imminent step that the doctors did not take was to ask the next logical question, “At what point after birth can the child be killed?” In other words, since the unborn child and newborn child are “potential persons,” at what point do they become “ACTUAL PERSONS,” and at what point would killing them be considered murder? Although these doctors did not venture this far, at the rate this argument is progressing, it is only a matter of time. Hitler might be a good resource for them on how to proceed.

Two outcomes are possible here. A crossroad, if you will. Either people will wake up to see the horrible place we have been headed toward all these years OR people will simply take another step . . . another step further from God.  So what is that next step that should be taken and who should take it?

Folks, my brothers and sisters in Christ, it is time for YOU to take the next step and now is the time to take it.  The progressive movement towards devaluing human life is no longer a theory proposed and proclaimed by the “Christian Right.”  It is right here, in black-and-white, in a credible (or maybe not) medical journal.  When this subject comes up among classroom debates and political discussions at work, why be silent?  The inevitable result is now out for all to see.  The birth of a child is no longer a line in the sand when it comes to murder.  We must be the voice for unborn infants and very soon . . . even newborn infants.  The day is coming when parents can sit in a hospital room, discuss the implications of a new child, and then call the nurse or doctor to “take care of the baby.”  It appears that the time is coming when a couple that is struggling to make ends meet or they have had yet another night in a long string of sleepless nights will be allowed to murder the infant and be protected by the law.  In due time, will it even be the choice of the parents?

Perhaps you think this will not affect you.  What about the larger picture?  If the value of a “child” is based upon self-awareness, as this article proposes, what about the elderly adult with Alzheimer’s disease.  If you think that infanticide and euthanasia do not go hand in hand, PLEASE wake up.  It is amazing how far sin will take us, step-by-step, when we attempt to ignore God and “go it alone.”  We must adhere to a Biblical worldview.  We must pray for our nation and the conscience of those who would believe this would be the correct direction.  We must do all that we can, with our voices and with our votes, in hope that others will take a step back, think about what we are doing, and hopefully change the direction.

It will not happen overnight.  It will take time.  The urgency is great, but things will not change unless we take that first step.  Be bold.  Trust in God and let’s start walking in the right direction.