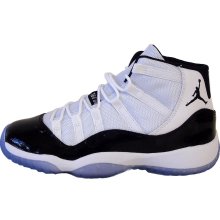 The saying, “If the shoe fits, wear it,” was a comment that people would make if a description or an attribute was assigned to an individual (or group), and although the individual might be offended by the comment, if it was accurate he or she ought to own up to it.  In many ways, it was a way to get the offended party to take a second look at themselves or their character in order that they might change it.  That no longer seems to be the case in this day and age.  Nowadays, evidently if the shoe fits . . . fight for it, steal it, or even kill for it, but don’t worry – your character is not in question.

I am not sure why I am shocked by anything that happens anymore.  It seems by now I would understand the fact that people will do anything.  This was once again proven by the response of people upon the release of the Nike, Air Jordan Retro XI.  I have to admit that it DID NOT surprise me that people would kill for shoes.  People have killed for less, but what did surprise me was the response from community activists and “ministers” (There is a reason the second group was put in quotes).  The response was . . . simply put . . . pure stupidity.  If you are not aware, these so-called leaders in the Houston area called for Nike to lower the price of the shoes so that more people could afford them and that way, perhaps, the violence would be curbed.

Let me begin my response by saying, please remove the name “minister” or “reverend” from your names if you considered this to be wise response.  What an embarrassment for those who have truly been called by God to be ministers and secondly what an embarrassment for the city of Houston.  None of those calling for Nike to lower the prices will read this, but for those who do, let me tell you the problem.  The problem is not Nike.  The problem is the character of those who feel that it is their right to own these shoes and their prerogative to enact harm on people in order to get them because of jealousy, envy, and coveting.  This type of behavior should not only be discouraged and punished, but the leaders ought to be ashamed of themselves in regard to their cowardly response and/or their ignorance.

Where were the ministers leading their people to The Word?  Scripture presents a much different picture than their outcry.  We are told that the King of kings and the Lord of lords LOWERED Himself.  He became a helpless child and died on the cross for you and me.  Paul tells us in Philippians 2 that we are to have this type of mind.  It was Christ Jesus:

Who, though he was in the form of God, he did not count equality with God a thing to be grasped.”  Philippians 2:6

Again, where are the local ministers proclaiming this truth?  Instead of confronting those who were grasping at wealth (shoes), no matter the cost, the loudest voices essentially proclaimed, “Lower the prices so they can grasp whatever they want.”

Firstly, you might not be aware of this, but there is not one time in scripture where the rich are condemned . . . for being rich.  For those who have plenty (That includes most, if not all who are reading this, including myself), we see how we ought to love others who have less in 1 John 3:

17But if anyone has the world’s goods and sees his brother in need, yet closes his heart against him, how does God’s love abide in him?  18Little children, let us not love in word or talk but in deed and in truth.

So, it is clear that if we are in Christ and Christ is in us, our heart should be moved by the need of the poor and we ought to give.  If we do not, then the passage is clear . . . God’s love does not abide in us.

Secondly, at no time in scripture are the poor told to go take from the rich because the rich have plenty.

Nike has never claimed to be a Christian organization or company.  It is a business.  The company makes a product and then sells it to a willing customer.  If the shoe price is too high, don’t buy it.  If there are no willing customers to pay the price, they will have to lower the cost.  Where were the activists and ministers proclaiming this simple rule of economics?  I saw on eBay, as I wrote this blog, Air Jordan Retro XI going for $340 and that was after 11 bids.  Perhaps, Nike made the price too low, because evidently some people are willing to pay over $300 for the shoes.

Here is the reality:

Do you know why the supplier can charge these ridiculous prices???  Because you, the customer (the demand) will pay it . . . and evidently, much more.  These shoes are so “worth it” that some are even ready to take another person’s life for them.

You see, the problem is not Nike.

The problem is a self-centered society that values the non-essentials as if it were life itself and an entitlement belief that it deserves and should get whatever it wants.

The problem is leaders (activists and ministers) who are too blind to call these riots, fights, and killings over something so petty as shoes unjust, unrighteous, and immoral.

This truth might upset some, but IF THE SHOE FITS, WEAR IT.